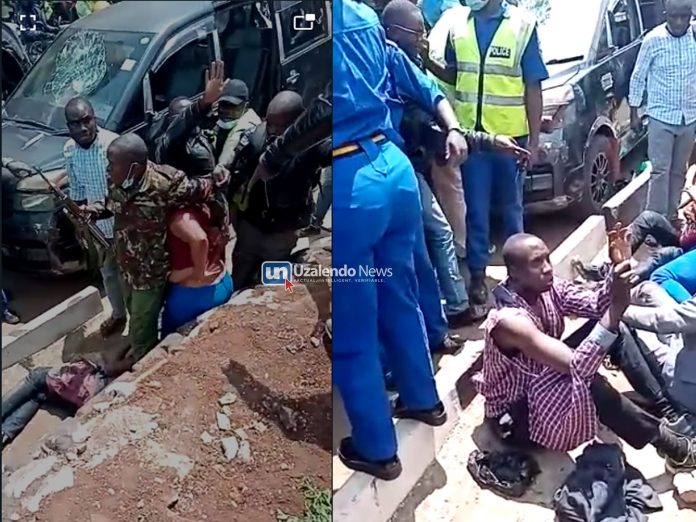 A gang of 4 suspects caught stealing from a bank client had the police to thank after being stoned to near death by an angry mob. – By Gerald Gekara.

The incident occured outside the Co-operative bank headquarters in Nairobi, where a Nairobi resident was withdrawing money.

The gang of four who were trailing the man, pounced on him, posing as Safaricom agents before robbing the client off Ksh. 320,000 in cash.

However, as the assailants made away with the loot, the terrified man raised the alarm to passers by, who immediately started pursuing the robbers.

The criminals attempted to flee in a black Toyota Voxy van, before being stopped by boda boda riders who had been chasing them.

Police officers patrolling the scene were forced to fire in the air to disperse the mob who were baying for their blood.

Police officers rushed the assailants to hospital for treatment, putting each of the criminal under arrest while allowing them to get treatment.

Ahmed Shariff Gadhafi, Veronica Musau and Jeremih Murimi will be arraigned on charges of robbery with violence.

Police officers urged citizens to follow the law in dealing with criminals, adding that no Kenyan has the right to take another person’s life.