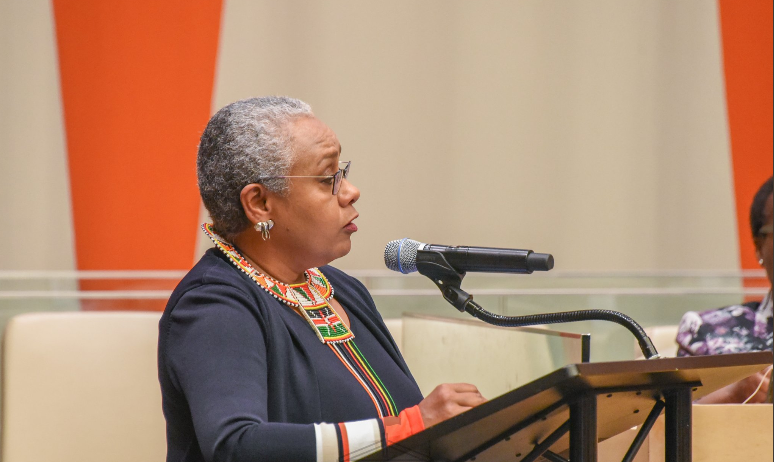 First Lady Margaret Kenyatta has said social protection is a fundamental human right and a challenge with a bearing on not only human health but also on the overall human development.

The Kenyan First Lady challenged global leaders to reflect on how they can use their leadership influence to ensure the issue of social protection is responsive to the most vulnerable groups in their societies.

First Lady Margaret Kenyatta recounted her experience in advocacy, saying her actions resulted in the refocusing of national attention towards ignored areas of the health sector especially the primary causes of maternal and child mortality.

“When I stepped into the role of being First Lady, it allowed me to start thinking about how this position could make a difference and change the course of our country’s future in the health arena,” said the First Lady.

The First Lady spoke when she addressed over 500 delegates during the ongoing 63rd Session of the Commission on the Status of Women, which is taking place at the United Nations Headquarters in New York city.

The theme of the side event was “ The Power of Women’s Agency in Transforming Social Norma for Better Health Outcomes and Well Being.”

She said her simple message that “No woman should die giving life’, resonated well with the masses thereby creating awareness on the health challenges that had long been an impediment to social protection especially lack of access to quality health care, information and education for women, children and vulnerable societies.

“The principle ‘idea’ of Beyond Zero is to spur a ‘movement’ across the country about an issue that weighs heavily on the minds of ordinary Kenyans, ordinary families,” said First Lady Margaret Kenyatta.

The Kenyan First Lady pointed out that at the time of the launch of Beyond Zero Initiative in 2014, Kenya was considered one of the most dangerous places for a woman to give birth due to the high maternal and neonatal mortality rates.

She also said at that time, chances of survival for an HIV patient was very low and yet the fatalities could have been prevented using proven, affordable and sustainable interventions.

“At that time, the total maternal deaths were 6,300 per year and 13,000 new HIV infections occurred among children annually and the number of pregnant women attended by skilled health workers during delivery was at 44%,” the First Lady said.

She said, it is the above factors that created a sense of urgency within her requiring immediate action.

“An advocacy initiative such as Beyond Zero was timely in creating momentum, mobilise leadership and raise commitment towards achieving results in HIV, maternal newborn and child health,” she pointed out.

The First Lady said the Beyond Zero initiative is anchored in an ideology that exemplifies complementarity to existing global and national health sector plans, policies, and services which accelerates inspired action by all stakeholders to provide concrete solutions.

She noted that through Beyond Zero, the country has over the past five years made great strides in reducing maternal and child mortality.

“Through our collective efforts, we have contributed to prevention of thousands of mothers and babies dying from lack of access to healthcare, ”said the First Lady.

Adding, ”We have contributed to the widespread awareness around the health challenges facing women, children and vulnerable communities.”

The First Lady said at the national level, Beyond Zero has instituted significant progress in Kenya’s healthcare system by increased safe deliveries at health facilities to over 60%, increased breastfeeding rates to more than 60%, increased immunization rates to over 63% and reduction of mother to child transmission of HIV to 11%.

The initiative has also contributed to increased resource allocations to health and expanded access to specialized care at national and sub-national levels.

“For example, under the Government’s universal health care coverage, dialysis and chemotherapy are now included under the National Health Insurance Scheme,” said the First Lady.

Princess Mabel Van Oranje of Denmark who spoke through a video link commended the Kenyan First Lady for her initiative saying it has greatly helped women, children and the most vulnerable groups in society access quality public health services.

The Dutch Princess, a great champion of global partnership to end child marriages under the movement  ‘Girls not Brides’, said she will continue collaborating with First Lady Margaret Kenyatta to ensure women and girls are empowered to achieve their goals.

In attendance were the Cabinet Secretary for Public Service, Youth and Gender Affairs, Prof. Margaret Kobia, Chief Administrative Secretary in the Ministry Rachel Shebesh and spouse to the former Prime Minister Ida Odinga.